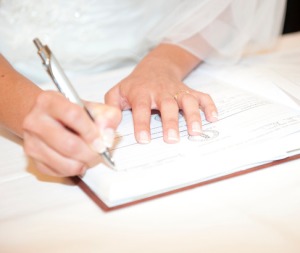 We ended previous post with some questions, and true enough, there are many more questions about this topic than I can cover in MDR series. But in order to answer some of these, we must first have clarified one thing – marriage is a contract between two people.

I know there are many who dislike to connect a marriage to a contract. They tend to believe that marriage should be called a ‘covenant’, and not ‘contract’; because a contract can be broken while a covenant can not be broken, even if the covenant conditions repeatedly are been broken. It’s sort of something ‘divine’ over the word covenant, and true enough it is divine when God stand behind it, as when God makes a deal with his people. While a ‘contract’ is seen as a national agreement, a trading agreement or an agreement between an artisan and landlord – and can be broken.

The problem with such thought has probably occurred because we already know of an unbreakable covenant in the Bible – The New Covenant, or the New Testament as we call it, and many believe that all ‘covenants’ is so. This new covenant, by the way, is not based on keeping conditions (on our part), but it has not always been so. The first contract God made with Israel was at Mount Sinai and had clear terms with blessings and condemnations for those who kept or broke the terms.

These two words, ‘contract’ and ‘covenant’, are both translated from the same Hebrew word – ברה, berith, and therefore there is no difference between these two words in the Bible. We have no reason to differentiate between these, they are one and the same berith, (ברה.). In Ancient Near East sources (ANE), the concept of a ‘covenant’ was used as a agreement-contract, a contract for hire work/workers and many other types of agreements, including marriage.

We can see that the marriage is called a ‘contract / covenant’ (ברה, berith) through all the Pentateuch and the rest of the Old Testament. The relationship between God and Israel is portrayed as a ‘agreement-contract’ in Pentateuch, and the structure of Deuteronomy follows much such contracts as we find among ANE sources; It begins with a historical prologue (Deut. 1-4), then follows the terms of the contract (Deut. 5-26), names and witnesses (Deut. 4:26, 26: 16-19), and it ends with blessings and curses (benefits and penalties by broken promises) (Deut. 27-27). This is repeated in Genesis 2 – Leviticus and Joshua 24. What we can notice of in the Scripture that is different from ANE contracts, is that the witnesses are not a collection of gods but God Himself, who is also a party to the contract.

In Ezekiel it shows that God marries the nation of Judah when he repeatedly refers to their marriage covenant (Ezek. 16: 8, 59-62). And in Ezek. 16: 8 we see how He went into the marriage settlement in a kind of ceremony and oath:

“When I passed by you again and saw you, behold, you were at the age for love, and I spread the corner of my garment over you and covered your nakedness; I made my vow to you and entered into a covenant with you, declares the Lord God, and you became mine.” (Ezekiel 16:8 ESV)

The Main Reason For Contract

So, what was the main reason with a ‘covenant’ or a contract? It was, and still is, to show agreement between two parties that were mutually binding and contained terms and sanctions. A covenants could be made, kept and broken, and they were carried out in the form of a document and / or by a ceremony. They had conditions that were agreed upon by both parties, and sanctions that took effect when one or more determination was broken by either party or both (blessing and cursing). The concept of a marriage settlement, or marriage contract, can be traced as far back as ANE and extends all the way up to the Greek-Roman culture in the 1st century. The concept of a marriage therefore has a long tradition and can not be ignored when we read the Bible, because the Bible picks up precisely this concept.

Payment, terms and agreement in a matrimonial contracts in the Old Testament was not the only thing that was similar to what we find in a matrimonial contracts of ANE sources, they also had the same ‘legal language’. A covenant was not only bound by the blessings and curses (benefits and penalties) alone, but it was also bound up with an idea that was built on mutual interest and loyalty. I find it interesting that this mutually and loyalty were often expressed as “love” even in ordinary business contracts.

In a matrimonial contract, payment was called dowry, and the purpose of a dowry was quite similar to an ordinary business deal, namely to give the marriage a security as well as a legal seal of the covenant. We will not go to deep into this, but dowry also gave a personal safety; it continued to belong to the bride after the marriage, even though the whole family took advantage of it. If the man died or divorced her, she kept her dowry and still had money to survive – besides if she caused the divorce. One could say that the innocent party retained thereby the dowry.

We will now look at what the actual marriage contract contained of conditions. According to the sources from ANE, it was not so much written contracts, but they were spoken. The terms could varied from marriage to marriage, and if it was anything who was written down, it was likely these variation of terms that were written down. But there were other conditions that was not so often written down, and these were conditions on rights and accountability. This conditions were the basis for a marriage contract. These unwritten condition, which was the basis of a matrimonial contract, was more important than the written conditions, because they were binding to every single marriage. One of these conditions was regarding the support her husband was expected to give to his wife as well as to other women dependent to him (polygamy), “he was obliged to provide food, ointment and clothing for her.”

The parallel to these ANE contracts and conditions we will find in Exodus 21: 10-11. Here regarding several wives and slaves (polygamy and slavery).

“If he takes another wife to himself, he shall not diminish her food, her clothing, or her marital rights. And if he does not do these three things for her, she shall go out for nothing, without payment of money.” (Exodus 21:10-11 ESV)

We can here see three terms in the covenant; food, clothing and love. This law in Exo. 21 is a law about a slave woman who has married his master, but the law was a ‘case-law’ rather than a ‘statute law’1. That is to say that you should follow the principle of the law and not the letters. – We should ignore the details about slavery and polygamy and look at the principle; if a slave woman had the right to be free after husbands braking of the conditions, the free woman should also have the same rights. And if the free woman had these rights, men should also get the same rights. 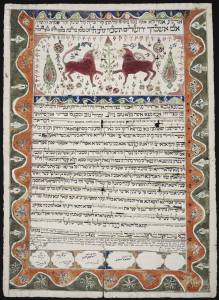 Husband “gave” his wife food and clothing by obtaining grain, oil and wool, so that the woman could make food and sew clothes, and thus mutual give back food and clothes to the man. They both agreed to give each other conjugal love. This we find in both, old and new Jewish Ketubah (marriage contracts).

The same marriage-vows, which I have just described above as conditions, are for the most part also used today, especially in Christian circles and it is taken from Paul who take the same three terms from Deut. 21: 10-11; food, clothes and love their wives.

“So husbands ought also to love their own wives as their own bodies. He who loves his own wife loves himself; 29 for no one ever hated his own flesh, but nourishes and cherishes it, just as Christ also does the church,” (Ephesians 5:28-29 NASB)

It is the same concept with God and Israel, in which God gives them love, food and protection (clothing) in the desert, and the land given them (Kanaan) flowing with milk and honey.

“on that day I swore to them, to bring them out from the land of Egypt into a land that I had selected for them, flowing with milk and honey, which is the glory of all lands.” (Ezekiel 20:6 NASB) 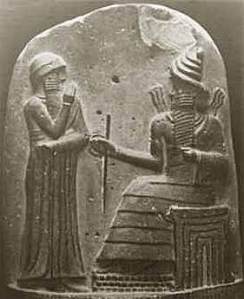 Although this is just a tiny bit of the amount of information we could take from ANE sources and compare it with the Scripture, we clearly see that marriage is a contract (covenant) between the two parties. The concept extends as far back as to ANE and King Hammurabi (1792 BC), and until the Greek-Roman culture in the 1st century.

When you choose to marry, you’re going into a contractual relationship with another party which, together with you, agree to the terms of the relationship. The four conditions we observed here is conjugal love, food, clothes and oil, and this should really be enough for a marriage. But even if we use these terms as marriage-vows today, the understanding of it are mostly gone along with taking this promises seriously. A covenant may like other contracts be made, kept and broken, preferably kept as God wants us to. This concept is taught throughout the Bible and is also taught by Paul.

With love (mutual), not of world’s love, but with the fruits of the spirit, which are “love, joy, peace, patience, kindness, goodness, faithfulness, gentleness, self-control”. (Gal 5: 22-23 BGO) it is possible to stick together in a marriage.

Statute law – A statute is a written law passed by a legislature on the state or federal level. Statutes set forth general propositions of law that courts apply to specific situations. A statute may forbid a certain act, direct a certain act, make a declaration, or set forth governmental mechanisms to aid society. (The Free Dictionary by Farflex).

– MDR stands for Marriage – Divorce – Remarriage. A shortcut I choose to use on this series where I deal with some christian problems in the questions of marriage, divorce and remarriage.

– Bible Verses are taken from NASB, unless otherwise noted.