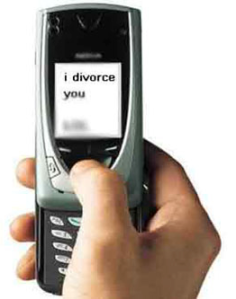 In these “electronic days”, some have discovered new avenues for divorce, for example a man from Dubai who divorced from his wife through sms. In Islamic Sharia law, it is possible to be divorced by either orally or bytext saying – “I divorce you” – three times, and no other reason is needed to be given. This opportunity is only for men and not for women. This not only seems to be a simple and unfair way to divorce, but in fact is. We wouldn’t find any of this kind of simple divorce-practice in the Bible … or? Actually, we can find an equally simple practice being used and discussed in the Bible too!

In the times of Jesus, the jewish men only needed to write a bill of divorcement to be divorced, and this almost entirely without any reason. As soon the wife had received this divorce letter, they were legally divorced. Such divorce is also simple and unfair, because he didn’t have to prove that his wife had done anything wrong, as she might not have done. In other words, groundless divorce.

It was between this simple divorce practice and another more limited divorce practice that was the big issue in the time of Jesus. It stood between Rabbi Hillels teaching and Rabbi Shamais teaching. These two “teachers” stood against each other on many issues and it is said that they debated about 316 cases. Because of the many disputes it led to a saying: “one law has became two”. One of the biggest disputes between these two groups stood precisely on the question of what was needed to send away his wife. Hillel’s teaching said that they could be separated from their wife for the smallest things, even at the insignificant thing as burning the food1. Shammai stood for a practice where it was only by sexual immorality they could separate from their wife.

So where do we find this discussion in the Bible? We find it in Matt. 19:1-9, where the Pharisees held on to Hillel’s teaching while Jesus taught them what the Scripture said. Jesus didn’t agree 100% with Shamai’s either, who said that only sexual immorality was the lawful reason for divorce, although this is not evident here in this discussion, and we are not going to deal with is here.

3 “And Pharisees came up to him and tested him by asking, “Is it lawful to divorce one’s wife for any cause?” 4 He answered, “Have you not read that he who created them from the beginning made them male and female, 5 and said, ‘ Therefore a man shall leave his father and his mother and hold fast to his wife, and the two shall become one flesh ’? 6 So they are no longer two but one flesh. What therefore God has joined together, let not man separate.” 7 They said to him, “ Why then did Moses command one to give a certificate of divorce and to send her away?” 8 He said to them, “Because of your hardness of heart Moses allowed you to divorce your wives, but from the beginning it was not so. 9 And I say to you:whoever divorces his wife, except for sexual immorality, and marries another, commits adultery.”” (Matthew 19:3-9 ESV)

The Pharisees refers to Deut. 24:1-4 when they discussing with Jesus. It is the first question here that is interesting us, and it shows us what kind of teaching they held. The Pharisees ask Jesus if it is “lawful to divorce one’s wife for any cause?” (Matt. 19: 3).

Lets quote Deut. 24:1 and see how Hillel had come to how it was allowed to divorce his wife for any cause.

“When a man takes a wife and marries her, if then she finds no favor in his eyes because he has found some indecency in her, and he writes her a certificate of divorce and puts it in her hand and sends her out of his house, and she departs out of his house, (Deut. 24:1)

The phrase “found some indecency” was interpreted to have two (2) reasons for divorce. One reason for ‘sexual immorality’ and one by ‘any cause’ or ‘any reason’. Their divorce-practice was actually named ‘any cause’-divorce. To see how they had come to this conclusion, we must translate this verse more literally from Hebrew, so this little phrase would thus become something like this:

“And it happens that she no longer finds favor in his eyes because he has a reason for sexual immorality with her“.

It was loudly debated around this form of divorce in the 1st century, and the phrase ‘any cause’-divorce was also mentioned among other Jews, as historian Josephus who mention it in his Antiquities of the Jews 8.4.23 (235);

He that desires to be divorced from his wife for any cause whatsoever, (and many such causes happen among men,) let him in writing give assurance that he will never use her as his wife any more;

When we now know what this debate was all about, we can then, with a little more information also understand Joseph, whom Matthew considered as righteous. Once this simple divorce practice had replace the traditional divorce practice, Joseph considered to use ‘any cause’ practice instead of ‘sexual immorality’ to not mock Maria.

“And her husband Joseph, being a just man and unwilling to put her to shame, resolved to divorce her quietly.” (Matt. 1:19 ESV)

Okay, I know it pops up a question in some of you, so let me answer that first. As we know, in our 21st century mind, and rightly so have been taught for decades, Josef and Mary was only engaged. So why was it necessary for Joseph to divorce when they were only engaged? An engagement at that time was more binding and was taken more serious than most of the engagements are today. A engagement was usually been made visible and officially by bride and the groom were promised to each other, the groom’s payment, and a engagement lasted usually a year, but they had not yet consummated the marriage. Therefore, an approach to other than their fiancee were thus regarded as adultery (Deut. 22: 23-27). Two witnesses agreed (normally) mutual, and the groom’s declaration was necessary to establish the Jewish engagement (In a Roman betrothal was a consent alone enough).

Back to Mat. 1:19, and to finish Joseph’s case. The meaning behind the phrase “in silence” was to use a practice who did not require public evidence such an accusation of sexual immorality would needed. Why did Matthew regarded this as fair? Joseph had the opportunity to choose between ‘any cause’ (silently) and ‘sexual immorality’. I guess Joseph could prove her “guilt” (sexual immorality) by her pregnancy, so he could easily have regained their families payment of bride-price and possibly dowry from Mary’s parents. But if he used ‘any cause’-divorce (in silence), he would let the bride price be, and also pay back the dowry which may have been paid by Mary’s parents. This was something he considered doing instead of putting Mary to shame and possibly retain the dowry.

There are many who believe that according to the Bible it is not allowed to divorce no matter what. According to this traditional interpretation, it may seem that the Pharisees ask Jesus if He meant divorce itself was legal or not. But the question whether it is legal to divorce is illogical, because; for the Jews, divorce meant ‘the procedure defined in the law of Moses.’ Meaning there is a divorce procedure in the Mosaic law and will therefore be illogical for any Jews to ask such question. We will come back to this divorce procedure later.

When Jesus was answering the Pharisees – “…whoever divorces his wife, except for sexual immorality (adultery),…” (Mat. 19: 9) – this phrase was not meant as an universal answer, but rater a direct response to the Pharisees question regarding the practice of  ‘any cause’-divorce. When Jesus said ‘except for sexual immorality’, He pointed to the additional reason (the ‘any cause’ that Hillel had added and Pharisees was asking about), are not included in the term ‘some indecency in her’ (‘a cause of sexual immorality’) (Deut. 24: 1). Thus rejected Jesus Hillel’s explanation of the word he thought was redundant of Moses to use – the word ’reason’ to mean ‘any reason’.

Nor did Jesus meant that “there is no divorce whatsoever in any part of Scripture, besides ‘sexual immorality’. He would then have contradicted Paul or visa versa (1 Cor. 7:15). We come to Paul later. With this statement He also opposed Shammai’s teaching, that says only sexual immorality is legal reason for divorce.

Jesus with his exaggerated statement saying; Not only is it wrong to divorce themselves from a faithful wife, it is also invalid in the eyes of God. Here He appeals to God’s original meaning of marriage (Gen. 2:24).

In the next post we will go through Matt. 19, and see more thoroughly in the teaching that Jesus is giving here, but let’s just finish Mat. 19: 9 before we end this post. When we now know which details the discussion between Pharisees and Jesus goes into, it is also easier to see the importance of what Jesus is actually saying.

Or let us rewrite this a bit, just for the sake of simplicity.

MDR stands for Marriage – Divorce – Remarriage. A shortcut I choose to use on this series where I deal with some christian problems in the questions of marriage, divorce and remarriage.

1 – Rabbinic commentary in Sifrè on Deuteronomy 269.

Bible Verses are taken from ESV, unless otherwise noted.